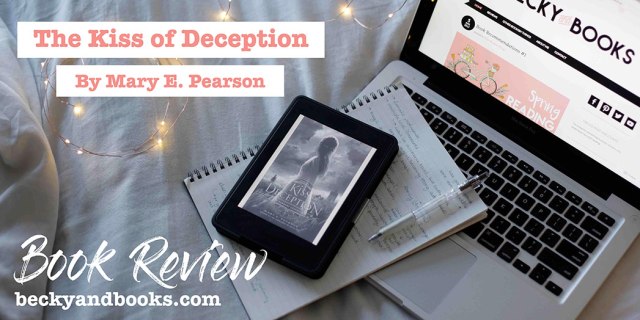 Listen up folks! Grab some snacks and refreshments, pull up a chair, and get comfy because I’m about to gush.

This story was intricate, clever, engrossing, and beautifully written. I’m sitting here at my keyboard having an extremely hard time coming up with the right words to do this book justice. I’m hesitant to even label this books as “young adult” fantasy because it’s so much more than that. I adored this book.

Today was the day a thousand dreams would die and a single dream would be born.

The wind knew. It was the first of June, but cold gusts bit at the hilltop citadelle as fiercely as deepest winter, shaking the windows with curses and winding through drafty halls with warning whispers. There was no escaping what was to come.

The Kiss of Deception (the title I am not partial to…) tells the story of Lia, a seventeen year-old princess, who flees on her wedding day to escape a marriage to a prince she does not love, nor has ever met. Not long after Lia arrives in a small seaside town, with hopes of starting a new, modest life for herself, two mysterious and handsome strangers arrive. Unbeknownst to her: one is the jilted prince and the other is an assassin sent to kill her. Interestingly, as the reader, both you and Lia don’t know who is who, so a portion of the story is spent attempting to discern their separate identities (I loved this clever bit of storytelling — it was so fascinating).

Romance. Yes… if you hadn’t already guessed it, this book has a love triangle. And as overdone and often poorly executed that trope is, I thought Pearson’s rendition was impressive and well thought out. Both male counterparts are flawed but likeable, making it difficult to single out your favourite.

Fantasy. Many of the negative reviews for this book criticize its lack of fantastical elements. Yes, it is a high fantasy (the majority of it takes place in an imaginary kingdom called Morrighan, which is deeply rooted in religious tradition), but there is very little of the usual magical stuff. There is no spell casting or hexing, no unicorns or dragons (yet). Rather, the magic is subtle and ambiguous. Usually I don’t like that, but the way that its gradually explained through stories and myths, and how its tied to the Gods made me love it!

Our protagonist. I really liked Lia. Like really liked Lia. She’s intelligent, knows her strengths and weaknesses, and never did anything incredibly stupid that made me want to yell at her (you would be surprised how often this happens to me). In fact, near the end, I wanted to stand up and cheer for Lia and all her badassery!

Oh my god, the writing. This was the selling point for me. I haven’t read a story this beautifully written in ages. I was constantly in awe of Pearson’s ability to weave words and sentences together to create vivid images in my head. There was a moment in the book when Lia first arrives at the seaside town that I wanted to cry because the description was so beautiful!

For someone who appreciates good writing, romance, and wants to try dipping a toe in some fantasy, this story is perfect. I am hella excited to start reading book two, The Heart of Betrayal!

Until next time nerds,

I’m a twenty-something business graduate working in Toronto, Canada. This is my book blog, where I share my love for all things bookish.